The Heisenberg uncertainty relation is often seen as one of the most important insights of quantum mechanics. This chapter shows how it can be expressed as a statement about the ability to simultaneously prepare properties.

You can download the slightly more detailed Chapter 7 of the teaching materials as a pdf file to help you.

In preparation for understanding the Heisenberg uncertainty relation, we will again discuss the preparation of properties concept (preparation).

Using the example of the horizontal throw, as familiar from the example of the catapult from Chapter 2, we recognize that position and momentum have to be prepared simultaneously to produce identical initial conditions, i. e. identical values of the launch position and the launch velocity.
“Prepare” means that the spread of the measured values is zero or very small when measurements of the prepared quantity are undertaken on an ensemble of balls. This simultaneous preparation for position and momentum, i. e. two properties, does not pose any problems in principle in classical physics.

Although individual properties for an ensemble of quantum objects can be prepared in quantum physics (e. g. polarization properties with photons), it is not possible to prepare several at the same time. Pairs of properties exist (e. g. position and momentum) whose simultaneous preparation is fundamentally impossible, although the preparation of the individual properties does not come up against any fundamental limits. This is the essence of Heisenberg’s uncertainty relation, which is to be explained in more detail in the sections below.

7.2 Preparation of position and momentum for photons

To show the impossibility of the simultaneous preparation of position and momentum, we look at the following experiment where we want to try and produce both properties simultaneously: We use the photons of a monochromatic laser beam as the quantum objects

Since the beam is very well collimated, the momentum component1)

perpendicular to the beam direction (i. e. in the y-direction) for all photons is practically zero; this means that the spread of possible measured values of a large number of photons around the value

The laser beam has a certain spatial width in the y-direction, however. Possible measured values for the position component y therefore have a spread

. The photons are therefore not prepared for the property “position component y”.

To now carry out this preparation – i.e. to reduce the spread of the position component y – we could make the beam pass through a narrow slit.
We know from wave optics, however: If a laser beam passes through a narrow slit (width d), it becomes wider behind the slit. If the slit width is varied, the following result is achieved: The narrower the slit, the wider the beam becomes.

Fig. 7.2.2 Diffraction of a laser beam at a slit aperture

The slit has caused the laser beam to become narrower immediately behind the slit. This means that the measured values of the position component y in the slit plane are not spread as much: The spread has been reduced from

. This corresponds to an improvement in the position preparation. But unfortunately, the widening of the beam behind the slit shows that the photons are no longer collimated: The photons now have a spread in the transverse direction and have lost their property “momentum component

This is a general principle in quantum mechanics, which can be stated as follows:

Heisenberg’s uncertainty relation:
It is impossible to prepare an ensemble of quantum objects simultaneously in respect of position and momentum.

Discussion regarding the textbook approaches

7.3 A measure for the “quality” of a preparation

It is possible to formulate Heisenberg’s uncertainty relation even more quantitatively, i. e. as a relation that states how “well” position and momentum can be prepared simultaneously on an ensemble of quantum objects.
The expression “quality of a preparation” to be clarified can be explained using the example of the single-slit experiment with electrons.

Thought experiment: A beam of electrons is incident on a slit of width d. Immediately behind the slit is a high-resolution detector which can detect the electrons with a resolution which is far higher than the slit width. It registers the number of electrons arriving at a certain point per second (Fig. 7.3.1).

Fig. 7.3.1 Preparation of an electron beam for the property “position”

The detector conducts position measurements on the electrons which pass through the slit. To record the distribution of the measured values within this region statistically, we determine their mean value

and their standard deviation

preparation is perfect (measured values have no spread).

preparation is imperfect (measured values have a spread).

The relationship between the spread of measured values and the property which an object possesses can be illustrated once again using an analogy from classical physics.
For this purpose we consider round and square metal plates. The round plates have the property “diameter”. Such a property cannot be assigned to the square plates, the question about their diameter is meaningless.

> What happens when we nevertheless try to measure a diameter with the square plates?

> What is the result when we try to measure a property which the object concerned does not even possess?

To find the answer, we have to invent a measurement method for the property “diameter”. We can measure the distance from edge to edge at different angles with a tape measure. The constraint here is that the tape always has to go through the center of the object.

> We always get the same measured value for the round plates

they possess the property “diameter”.

> For the square plates the measured values have a spread

they do not have this property.

According to the same principle, we can ask for the property “side length”.

Fig. 7.4.2 Measurement method for the property “side length”

With this measurement method, the measured values for the round plates vary, while we always obtain the same measured value for the square plates, which gives the side length of the plates.

This shows that there are even examples for macroscopic objects where we have to be careful when assigning a property or that there are situations in which the simultaneous preparation of two properties (here: diameter and side length) is impossible.

With quantum objects, we generally have to use a suitable preparation method to ascertain whether the assignment is meaningful for each property.

One example: We can send light through a polarization filter with horizontal orientation (e. g. with the aid of the simulation experiment Polfilter.exe, which you possibly already know from Chapter 2.4). The photons behind the filter are now prepared to have the property “horizontally polarized” (Fig. 7.4.3). A test confirms this (= complete passage through a second, horizontal polarization filter).

The two properties cannot be prepared simultaneously, they are mutually exclusive properties.

7.5 Electrons at the single slit and quantitative expression of the uncertainty relation

The question is, to what extent are position and momentum preparation mutually exclusive?
Or in other words: Is there a limit to how close we can come to the ideal of a perfect preparation?

(see Section 7.4 for the corresponding spreads or standard deviations). For this purpose, we again consider the broadened diffraction pattern for an electron beam which passes through a single slit which gets narrower (Fig. 7.5.1, Experiment 7.4 in the lecture notes).

Here as well, the distributions of the measured position and momentum values for an ensemble of electrons are recorded immediately behind the slit (cf. Section 7.3), transferred into a histogram and the standard deviations (position

) determined. For a wide slit, the result is a relatively large position spread, but a small momentum spread (Fig. 7.5.2). 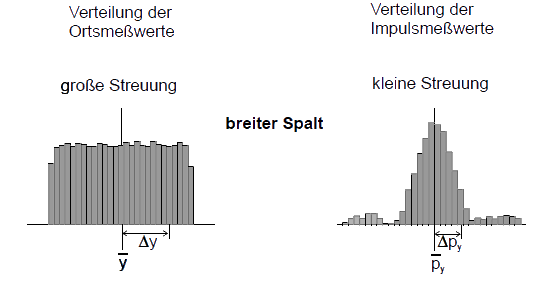 For a narrow slit, the position spread is now small, but the momentum spread large (Fig. 7.5.3).

), the wider the diffraction image. We can therefore estimate the spread of the measured momentum values at the slit using the width of the diffraction pattern on the screen.

Estimate of the momentum spread

Most electrons are registered on the screen within the principal maximum of the diffraction pattern, i. e. within the angular range between

(Fig. 7.5.4). We can therefore limit ourselves to this range to estimate the spread of the transverse momenta

The range of the principal maximum is limited by the first diffraction minima, its position is known from classical optics:

In the case of electrons,

is the de Broglie wavelength

of the incident beam prepared for the momentum

and finally approximating the spread of the measured position values

by the slit width

immediately behind the slit), we then get:

In this example, the product of the two spreads is always of the order of Planck’s constant

The equation above represents the quantitative expression of the Heisenberg uncertainty relation for the special example of the slit. In its general form, it describes in general how well position and momentum preparation are possible simultaneously:

is small, the spread of the measured momentum values

will be large (and vice versa). The following relationship applies:

Here you will find some additional explanations of the uncertainty relation.

Heisenberg’s uncertainty relation means saying farewell to the concept of the trajectory of a particle as it is used in classical physics.
The trajectory concept is related to the idea that the object simultaneously has a specific position and a specific momentum (velocity) at every point in time, something which is relatively self-evident in classical mechanics.
Quantum objects can never possess the properties “position” and “momentum” at the same time, however. According to Heisenberg’s uncertainty relation, the product of the spreads

must always be of the order of Planck’s constant h or larger.

But how can this be reconciled with the observation that electrons apparently follow a well-defined trajectory in an electron beam tube?

To solve this apparent contradiction, we consider the following example:

Fig. 7.6.1 “Trajectory” of the electrons in an electron beam tube

The spread of the momenta in the

-direction (i. e. at right angles to the beam direction) is therefore at least:

The velocity spread in the

-direction is obtained by dividing

by the electron mass:

For comparison, we calculate the velocity in the

-direction (i. e. in the beam direction) which an electron possesses for an accelerating voltage of

To traverse a distance of

, the electrons require a time of

In this time, the beam widens in the transverse direction to

, which is beyond all the limits of detectability. The fact that a “trajectory” can be seen in an electron beam tube therefore does not contradict the uncertainty relation.

The following points were important in this chapter:

Before you move on to the next chapter, make sure you know the fundamental ideas behind these points. You can then check this with the aid of the Summary.

Here you can download a Progress check of the contents of the course up to here.